Support Us
UPP Blog Court Therapy Dogs
​Learning from the experiences in 1st and 2nd District courts, UPP Volunteer Linda Webster worked diligently to help open the doors for therapy dogs in 3rd District courtrooms. Webster, who previously had a career in healthcare, became a Court Appointed Special Advocate (CASA) in June 2015. She served as a CASA for two years to understand the juvenile court system before she ever presented the court therapy dog program to a judge. Then in June 2018, Utah Pet Partners leaders including Webster, presented at the Utah State Conference of Guardians Ad Litem and CASA volunteers, spreading more awareness about the benefits of court therapy dogs, and the program has continued to grow since then. Currently, under the coordination efforts of UPP Board Member Attorney Laura Cabanilla, our court volunteer efforts are expanding to 4th District court as well. 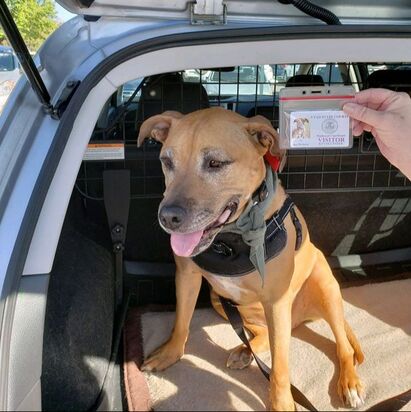 Lucy (Handler Linda)
​Webster, who volunteers in the court system with her therapy pitbull Lucy, has personally mentored the growing number of Utah Pet Partners teams that volunteer in the 3rd and 4th District courts, which are currently ten teams. During her first court experience with therapy dog Lucy, Webster said the child faced the corner and didn’t want anyone close. After taking one look at Lucy and then having an opportunity to play ball with her outside the courtroom, he hugged Lucy and was much more open to talking. In another instance, a mother spoke of her son that graduated from the juvenile court program and said, “I don’t think we’d have done it without you, because he didn’t want to go to court, but he did want to see Lucy.”
​Most assuredly, courtroom therapy dogs have proven to be a win-win situation for clients, visitors, and staff… and perhaps for the dogs, too.